SSC CHSL 10+2 Admit Card 2020 Download Tier 1:  Staff Selection Commission (SSC) will soon release the CHSL Tier 1 Admit Card. Department will have postponed the Tier 1 CHSL exams and now is expected to be conducted in the month of April 2020. Authority will release the hall ticket region-wise 10 days prior to the exam. Candidates can download the LDC & DEO Hall Ticket from the official website at www.ssc.nic.in and other Portal as Sarkari result & freejobalert. Eligible candidates can download the admit card via online mode.

Latest Update:- SSC CHSL Tier 1 Exams have been postponed due to the outbreak of pandemic Covid 19. Now SSC CHSL Tier 1 exams are expected to be conducted in the month of April 2020. 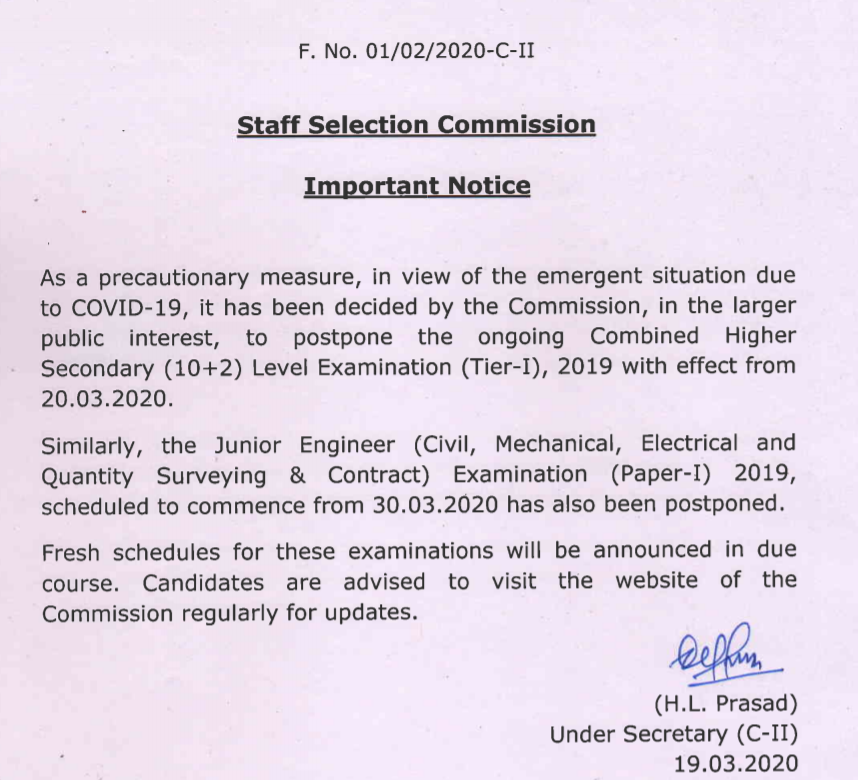 Earlier the Staff Selection Commission (SSC) has issued a recruitment notification for Combined Higher Secondary Level Examination (CHSL) 2020. Candidates applied for LDC / DEO, Postal / Sorting Assistant through CHSL Recruitment. The online Application form was fill up from 3rd December to 10 January 2020. Now the department has announced that the CHSL examination will be conducted from 17th March to 28th March 2020. The authority has announced that there will be no delay in the exam due to Covid-19 but has issued the important notice. Recruit authority has released the SSC CHSL Admit Card 2020 on 4th March. Enrolled candidates can download the exam admit card for online exam from the official website. Regular check this webpage to get more information and updates.

Staff Selection Commission (SSC) will be selected candidates for  LDC (Lower Division Clerk) / DEO (Data Entry Operator), Postal / Sorting Assistant through Tier 1 & Tier 2 Exam. Candidates who passed the tier 1 exam are eligible for the tier 2 exam. Candidates can download the hall ticket from the official website by using the Registration ID and Date of Birth (DOB). Applicants should take a hard copy of the admit card for future references. Candidates are not allowed in the exam center without hall tickets. So all candidates are advised to carry admit cards with one photo ID proof on the day of the exam. Check out the latest updates from the below section.

SSC CHSL Admit Card will be released for the tier 1 exam by region wise. Candidates can check the details printed on admit card such as Exam center address and timing of exam. Some instructions and guidelines also are given on admit card and candidates need to follow the guidelines during the exam session. Candidates if you found any errors then informed the official authorities for correction. We are given the region-wise admit card download Name Wise link in the below table. There are mainly 9 regions of SSC, check the direct link and download hall ticket for appearing in tier 1 exam 2020.

Q1. When will be the Admit Card for CHSL Tier 1 exam be released?

Q2. What documents I will have to carry during the SSC CHSL  exam?

Q3. Can I change my test center after the allotment of the admit card?

Ans. No, the test center for the SSC 10+2/CHSL exam cannot be changed.

Q4. Can I get my admit card for CHSL SSC exam in the offline mode?

Ans. No, SSC CHSL admit card will be only available in the online mode on the official portal.

✍Imp. UPDATE – Staff Selection Commission has released the CHSL Admit Card 2020. Candidates can able to check their SSC 10+2 Hall Ticket 2020 through given below mention link. ( You need to keep visiting this page for CHSL 10+2 Admit Card & Exam Date.⟳Update By Admit Card Team ???

Step 2: Then Open the home page of the Staff Selection Commission.

Step 4: Then Select your region and click on the link for CHSL Admit Card.

Step 5: Submit your required details such as application form ID Number and DOB.

Save it and take a print out for future use it.