www.ssc.nic.in CHSL Exam Analysis 2020 Today 17, 18, 19 March Questions for Shift 1, 2 Exam Postponed Notice Check Here:Staff Selection Commission (SSC) has conducted the Combined Higher Secondary Level Examination (CHSL) 2020 on 19th March 2020 in Shift 1 & Shift 2. Shift 1 Examination has successfully conducted from 10 AM to 11 AM. Today is the third day of the CHSL Exam and the CHSL examination will be conducted from 18th March to 28th March in three shifts. Participated candidates can check the CHSL Exam Analysis Today 19 March from the official website at www.ssc.nic.in. Check the subject wise exam analysis for Shif 1, 2 & Asked Questions Paper from the below section.

Earlier the Staff Selection Commission (SSC) has issued a recruitment notification for Combined Higher Secondary Level Examination (CHSL)  2020. Candidates applied for LDC / DEO, Postal / Sorting Assistant posts through this recruitment drive. Today 19th March SSC CHSL 10+2 examination has conducted in Two shifts. Candidates are curious to know the asked questions, subject wise exam review and difficulty level of 1st & 2nd Shift exam conducted on 19th March 2020. The exam of 19th March was easy to moderate and students didn’t face a lot of problems. We are given the Topic wise question asked in the exam, good attempts and difficulty level of exam here in the below section. Here we are given the complete details of exam analysis 19th March CHSL 2020 here. 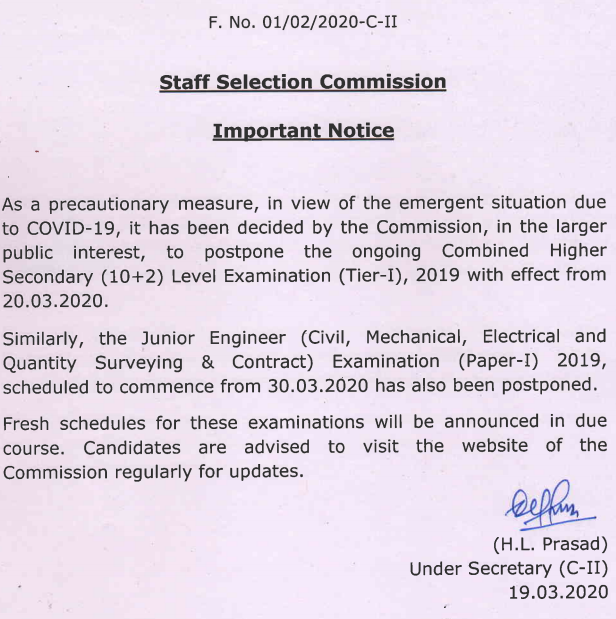 ▶ SSC CHSL 1st Shift 19th March 2020 Exam has conducted from 10 AM to 11 AM.
▶ Questions asked in order of Reasoning>GK>Maths>English.
▶ Total 100 Questions asked in the exam and 0.5 Marks deducted for the wrong attempt.
▶ The Mathematics section was easy.
▶ The English Section was relatively easy.
▶ In the reasoning section, questions were a bit tricky and time-consuming.
▶ The difficulty level of the exam was in the order – GK>Reasoning>Maths>English.
▶ Overall exam analysis is – Easy-Moderate.check live updates here

Q 9. Trigonometry Based 2 Questions asked in the examination

Q1. Which Section was the most difficult in the CHSL exam today?

Ans. As per the analysis, the Reasoning section was the most difficult of all.

Ans. All the sections were from easy to moderate so the overall level of the CHSL exam was quite moderate.

Q3. How many questions can be considered a good attempt for CHSL Tier 1 exam?

The average 78 – 82 questions will be considered as a good attempt for Tier 1 exam of CHSL.